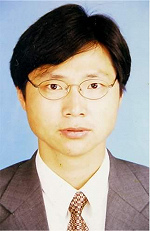 Professor Guoyin Wang was born in Chongqing, China, in 1970. He received the bachelor’s degree in computer software, the master’s degree in computer software, and the Ph.D. degree in computer organization and architecture from Xi’an Jiaotong University, Xi’an, China, in 1992, 1994, and 1996, respectively. He worked at the University of North Texas, USA, and the University of Regina, Canada, as a visiting scholar during 1998-1999. Since 1996, he has been working at the Chongqing University of Posts and Telecommunications, where he is currently a professor and PhD supervisor, the Chairman of the Institute of Computer Science and Technology (ICST), and the Dean of the College of Computer Science and Technology. He is also a part-time professor with the Xi’an Jiaotong University, Shanghai Jiaotong University, Southwest Jiaotong University, Xidian University, and University of Electronic Science and Technology of China. Professor Wang is the Chairman of the Steering Committee of International Rough Set Society (IRSS), Chairman of the Rough Set Theory and Soft Computation Society, Chinese Association for Artificial Intelligence (CRSSC). He served or is currently serving on the program committees of many international conferences and workshops, as program committee member, program chair or co-chair. He is an editorial board member of several international journals. Professor Wang has won many governmental awards and medals for his achievements. He was named as a national excellent teacher and a national excellent university key teacher by the Ministry of Education, China, in 2001 and 2002 respectively. Professor Wang was elected into the Program for New Century Excellent Talents in University by the Ministry of Education of P R China in 2004, and won the Chongqing Science Fund for Distinguished Young Scholars in 2008. He has delivered many invited talks at international and national conferences, and has given many seminars in USA, Canada, Poland, and China. The teaching group directed by Professor Wang was elected as a national excellent teaching group of China in 2010. The institute (ICST) directed by Professor Wang was elected as one of the top ten outstanding youth organizations of Chongqing, China, in 2002. The intelligent information processing research group directed by Professor Wang was elected as an innovative group of Chongqing in 2010. Professor Wang is the author of 3 books, the editor of dozens of proceedings of international and national conferences, and has over 200 reviewed research publications. His books and papers have been cited over 4000 times. His research interests include rough set, granular computing, knowledge technology, data mining, machine learning, neural network, soft computing, cognitive computing, etc.