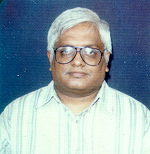 Short bio: C. A. Murthy was born in Ongole, India in 1958. obtained B. Stat (Hons), M. Stat. and Ph. D. degrees from the Indian Statistical Institute (ISI). He visited the Michigan State University, East Lansing in 1991-92 for six months, and the Pennsylvania State University, University Park for 18 months in 1996 - 97. He is a Professor in the Machine Intelligence Unit of  ISI. His fields of research interest include Pattern Recognition, Image Processing, Machine Learning, Neural Networks, Fractals, Genetic Algorithms, Wavelets and Data Mining. He received the best paper award in 1996 in Computer Science from the Institute of Engineers, India. He received the Vasvik award along with his two colleagues for Electronic Sciences and Technology for the year 1999. He is a fellow of the National Academy of Engineering, India and National Academy of Sciences, India. He has more than 60 international journal publications, and holds 8 US patents.